*PRIORITY VIOLATION is a major violation that directly contributes to increasing the risk of foodborne illness or injury.
NA means not available. See detailed inspection reports for additional information.
Grade
Priority Violation *
Cutting Edge Participant
B
1
Violation
ID
Violation Description
Violation Comments
Correct By
20
Proper cold holding temperatures
PRIORITY VIOLATION-3-501.16(A)(2) and (B), P: Time/Temperature Control for Safety Food, Cold Holding. For a permanent fix to this violation, check out these simple tools in our Active Managerial Control Toolbox, made especially for you. https://www.maricopa.gov/4576/AMC-Toolbox---Cold-Holding. Observed shell eggs and cartons of liquid eggs with internal temperatures ranging from 46-50*F, Swiss cheese slices with internal temperatures of 46-47*F, and ham slices with internal temperatures of 43-45*F in the reach-in next to the grill. PIC verified these temperatures with their own thermometer. According to PIC, the items were placed in the unit no later than the previous day, and no earlier than a few days before the inspection. The ambient temperature of the reach-in was 44.6*F, as measured by a min/max thermometer. According to the establishment's temperature logs, the ambient temperature of the unit was 39*F the same morning of the inspection. PIC stated that the temperature was taken at about 7 AM, more than 4 hours before the inspection (the inspection began at 12:13 PM). PIC also stated that the temperature of this reach-in tends to rise as the day goes on, and internal temperatures of the foods stored in this unit are not taken. PIC moved the ham to the walk-in to cool to 41*F and discarded all the other foods, which may have been out of temperature for longer than 4 hours. PIC also agreed to discontinue the use of this unit until it is repaired and able to maintain foods at 41*F or below. Advised PIC to ensure that all foods are maintained at 41*F or below by regularly taking internal temperatures, to prevent growth of harmful bacteria.
Corrected At Time Of Inspection
Inspection Comments

This establishment received a B Grade and had 1 Priority, 0 Priority Foundation and 0 Core violations on this inspection. No County legal action will result from this inspection. Andrew O. verbally acknowledged the Notice of Inspection Rights. A copy of the inspection report was printed and left at the establishment. A pattern of non-compliance is developing for Priority violation # 20, 3-501.16, which has been noted during this inspection. An Active Managerial Control Intervention Visit was offered to the person in charge. Failure to correct repeat violations may result in legal action. 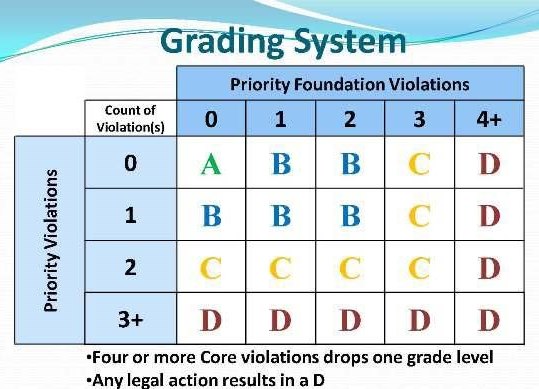